skip to main | skip to sidebar

During His visit to east, Guru Nanak Dev Ji reached the place of Gurdwara Gau Ghat (Gae Ghat) outside Patna city. On request of Bhai Mardana Ji, Guru Ji gave him a laal, a precious stone.

Bhai Mardana went to Patna city to sell the laal. He reached Sunar Toli market. Sunar means a gold merchant. A sunar named Murli Dhar took Bhai Mardana to Salas Rai Johri. Salas Rai was so amazed to see such a precious stone that he bowed before the stone and presented Rs 100 as darshan bheta (the money presented or gifted for viewing a thing).

Bhai Mardana took that money to Guru Ji. Guru Ji returned the gifted money back and said this money cannot be accepted because we haven’t sold the laal yet. Later, Salas Rai visited Gau Ghat to see Guru Nanak Sahib Ji. Guru Ji advised him that the way he recognised the value of the precious laal, he should also recognise the value of precious life, which was useless without remembering God. After listening to the teaching of Guru Ji, Salas Rai became His follower. Murlidhar also became follower of Guru Ji.

On the request of Murildhar, Guru Ji came to the place of Sunar Toli. Satsang was started there. This place is known as Gurdwara Sunar Toli.

Gurdwara Sunar Toli had very small space, later Mata Sudesh Kumar Arora and her family gifted their home adjoining the Gurdwara. This gurdwara is in the west of Takht Sahib. It takes 10 minutes to reach there on foot from Takht Sahib.

— This is translation of history written in Hindi on a board installed by Baba Harbans Singh Ji, Kar Seva Delhi Wale at Gurdwara Sunar Toli.
Click to enlarge the image:

Gurdwara Gau Ghat Sahib comes before Takht Sri Harmandar Ji, Patna Sahib. Sri Guru Nanak Dev Sahib Maharaj Ji came to village Bisambharpur to see Bhagat Jaita Mal Ji. At that time Bhagat Ji was aged 350 years. Bhagat Ji requested that he was unable to take bath in the Ganges (Ganga river), so Guru Ji should bless him with immortality (mukti). Guru Ji said only 9th Guru, Guru Tegh Bahadar Ji, would bless you with mukti. Your problem of taking bath in Ganga will be solved. Gaga will itself come to your home to let you take bath. Bhagat Ji said: Oh Trilokinath(Master of the Universe) ! if Ganga will come to my home to let me take bath, other people will have to suffer. Guru Ji said: Don’t worry, you sit in a tank, Ganga will come here in the form of a cow and shower water upon you. You can take bath in that water. Hence other people will also not suffer. This is how this Gurdwara took the name Gurdwara Gau Ghat. Guru Nanak Dev Sahib Ji stayed here for one year and six months. 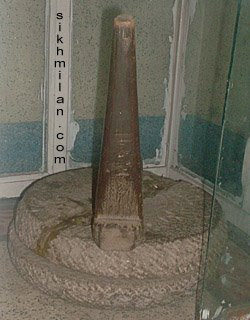 This grindstone (chakki) belongs to Mata Gujari Ji. It is placed in Gurudwara Gau Ghat.

Bhagat Jaita Mal Ji asked how would I recognize Guru Teg Bahadur Ji. Guru Ji replied: Guru Teg Bahadur Ji will come and sit (asan laga ke baithange) at the same place where I am sitting and give you darshan in the form of Guru Nanak Dev only. You can easily recognize Him.

At this place Guru Nanak Sahib gave a precious stone to Bhai Mardana Ji and sent him to the town where Gurdwara Patna Sahib is now located.

The Seventh Guru, Guru Har Rai Sahib had blessed Mata Nanaki Ji (mother of Guru Teg Bahadur Ji), that she will have a very brave grandson who will take Sikhism very heights. But He will be born in Bihar, Bengal.

Guru Teg Bahadur Ji started his tirath journey from Baba Bakala in district Amritsar. He reached tribeni (the place where 3 rivers meet) in Allahabad. There is a Gurdwara called Guru Ka Baag at a place named Ayapur in Allahabad. Here Mata Gujar Kaur Ji found herself expecting a child. Guru Ji and His family spent two months here. This Gurudwara is under the management of Nirmal Samparda.

After this, Guru Teg Bahadur Ji visited Mirzapur. Here He went to home of Jasram’s chacha Faguji. Passing through Gaya, He reached Bisambharpur – the home of place of Bhagat Jaita Mal Ji. All doors of home were closed because the village children used to disturb Bhagat Ji in his bhagti. Sikh Sangat kept on knocking the doors of his house for a long time. Bhagat Ji said, go away, no bhagat lives here.

Sangat said, Guru Ji and His family are standing out side. Open the door and let them in. Bhagat Ji said, no door is closed for the Guru. He will Himself come inside. Guru Ji asked if there was any other way to get in. Sangat said, there is a window. Guru Ji took a small shape and entered the house with horses and sangat through the window. 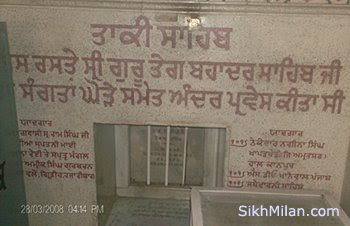 The window through which Guru Teg Bahadur Sahib entered the home of Bhagat Jaita Mal Ji with horses and sangat.


Guru Ji fixed a wooden pole into earth and tied His horse there (see photo). Then He sat on the seat (asan) of Guru Nanak Dev Ji and gave darshan (blessed vision) to Bhagat Jaita Mal Ji. Bhagat Ji left the world after taking the blessed vision of Guru Ji with his eyes. Guru Ji cremated his body. 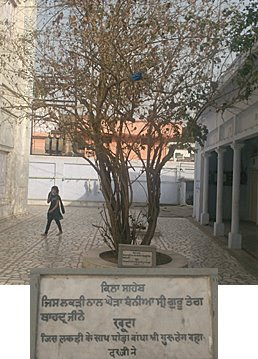 Guru Teg Bahadur Ji tied His horse with a wood here.
The wood has given rise to a full fledged tree. 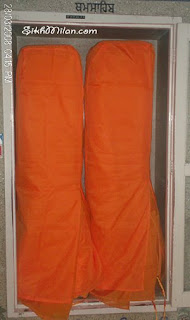 His house was reconstructed. When construction work was about to finish, king of Assam, Raja Bishan Singh came and requested Guru Ji for aid. Guru Ji instructed the construction work to be finished. The carpenters (karigar) requested Guru Ji that wooden logs were made of small size. They required to make larger logs. Guru Ji said they were of large size. Use them tomorrow. The next day carpenters again said they were of small size. Guru Ji said – look at them they are large. When they saw, they were infact large. Guru Ji said leave this building as it is. These two wooden logs have acquired the power. They were blessed with the name Thum Sahib (See photo on left) . Guru Ji blessed: When a patient comes here and embraces these thums, all his diseases will disappear. Issueless couples and those, whose issues don’t survive, may embrace these thums and do prayer. Their wishes will be fulfilled. They should put some money in guru ki golak, spare some money for karah parshad di deg and do prayer (ardas).

Guru Ji went to Asam with Raja Bishan Singh and left His family there only. Mata Gujar Kaur Ji remained there in pregnancy for seven months. Later she went to home of Salas Rai Johri in Patna and stayed there. At this place she gave birth to Guru Gobind Singh Ji. The home of Salas Rai Johri is now known as Gurduwara Takht Sri Harmandar Ji, Patna Sahib.
Posted by singhking at 1:21 PM 1 comment:

Sri Guru Teg Bahadar Sahib Maharaj Ji started his journey to eastern parts of India to nurture the garden of Sikhism planted by Guru Nanak Dev Ji. He reached Patna Sahib with His family in 1666 AD. Guru Sahib stayed there for some time during rainy season. He made plans to preach Sikhi in those parts. He assigned eastern states: Bengal, Bihar, Uriya and Uttar Pradesh to Bhai Dayal Das Ji. Bhai Sahib performed the assigned seva very well.

Bhai Bulaki Das Masand and Raja Ram Rai came to Patna Sahib to escort Guru Ji to Dhaka and Kam-Roop Desh. Mata Nanaki Ji wanted that Guru Ji might stay in Patna Sahib for some more time. But Guru Ji started His journey due to wishes and love of Sikh Sangat. Guru Tegh Bahadur Sahib' family and His brother-in-law Kirpal Chand Ji stayed in Salas Rai Johri's home, which was later converted into Gurdwara Patna Sahib.
It was the time when people were terrorised because of orders of Aurangzeb against Hindu temples. Guru Ji started visiting village-to-village and door-to-door to encourage people to be fearless for four long years.

Gur Teg Bahadar Ji seated in a garden of a navab outside the city of Patna. This garden is now known as Gurdwara Guru Ka Bag. It was a good day of Vaisakh Sudi Satvin. Sangat took Balak Gobind Rai in a palanquin (paalki) to the garden to get the holy glimpse of the Ninth Guru. On one side Father Guru climbed down the horse on the other side the Son came out of paalki. The Latter touched the feet of His father. Father took His son and kissed His face. Sangat touched feet of the ninth Guru and attained high spirits. Gurdwara Guru Ka Bagh is the souvenir of first ever meet of Father and Son. 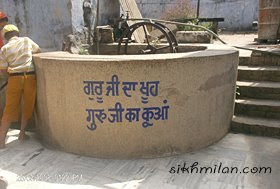 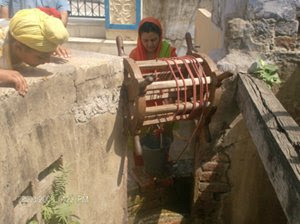 Sangat from Punjab is taking darshan of the well 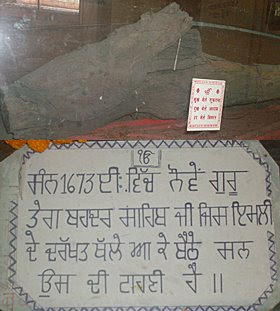 A branch of imli tree under which Guru Teg Bahadur Sahib sat at
Gurdwara Guru Ka Bag in 1673 AD.

This garden belonged to Karim Bakhash and Rahim Bakhash. It was dry of quite some time. It became green when Guru Ji’s charans touched it.
— Parbandhak Committee

History written above is translated from this history board in Punjabi placed in the Gurudwara. Click the image to see its large view. 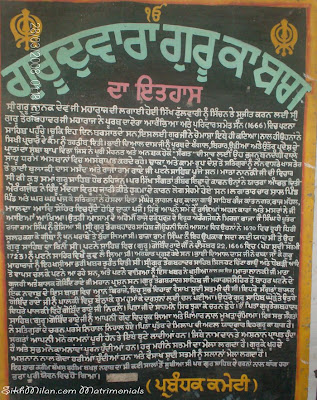 Posted by singhking at 1:12 PM No comments: